Just how long do polar bears live for?

While we could say the average lifespan of a polar bear is 15-20 years, some polar bears do make it to 20-30 years, but only a small percentage of polar bears make it past the 15-18 year mark. So a 20 year old polar bear would be considered a lucky polar bear.

How Long Do Polar Bears Live In The Wild? On rare occasions, adult male polar bears may kill other adult males when competing for mates, and have been known to kill female polar bears trying to protect their cubs, so even an adult polar bear is at risk of losing its life to another polar bear. While they have no natural predators, humans with guns have become a huge threat to polar bear life. Some are killed to protect people and property but some are also hunted for food, clothing, and their skins.

Of course, now polar bears are also facing a huge threat to their lives in the form of climate change. With the melting of the sea ice polar bears may struggle to have access to their natural food supply (seals) which can leave them malnourished and endangered.

With all of these threats to their lives and the struggle to find food, a polar bear will typically only live for 15-18 years in the wild. That being said, the oldest known polar bear in the Arctic reached the grand old age of 32 years! So that polar bear managed to have a good, long life! 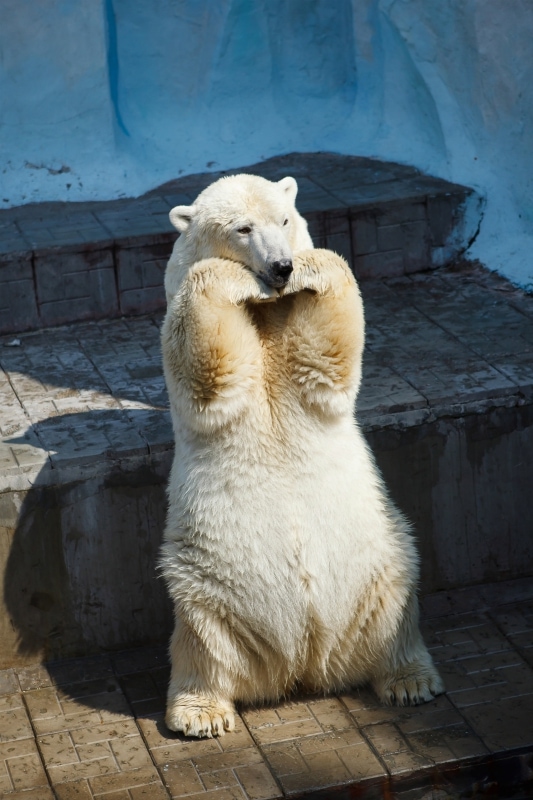 Living in captivity a lot of typical threats from the wild are taken away.

How Do You Know How Old A Polar Bear Is?

While we can easily tell when a polar bear is young – those polar bear cubs are so cute(!) – how do we know the age of an adult polar bear? It’s all about their teeth!

Of course, they can’t just walk up to a polar bear and have a look in its mouth so researchers need to extract a tooth from a polar bear to perform this test.

On the other hand, if the polar bear was born in captivity, it’s as easy as keeping track of the birth date and counting up the years just like the rest of us!

So, spare a thought for the polar bear, whether in the wild or in captivity it’s not always an easy life for them and certainly not a long one.