Everything You Need To Know About Polar Bear Swimming

Everything You Need To Know About Polar Bear Swimming 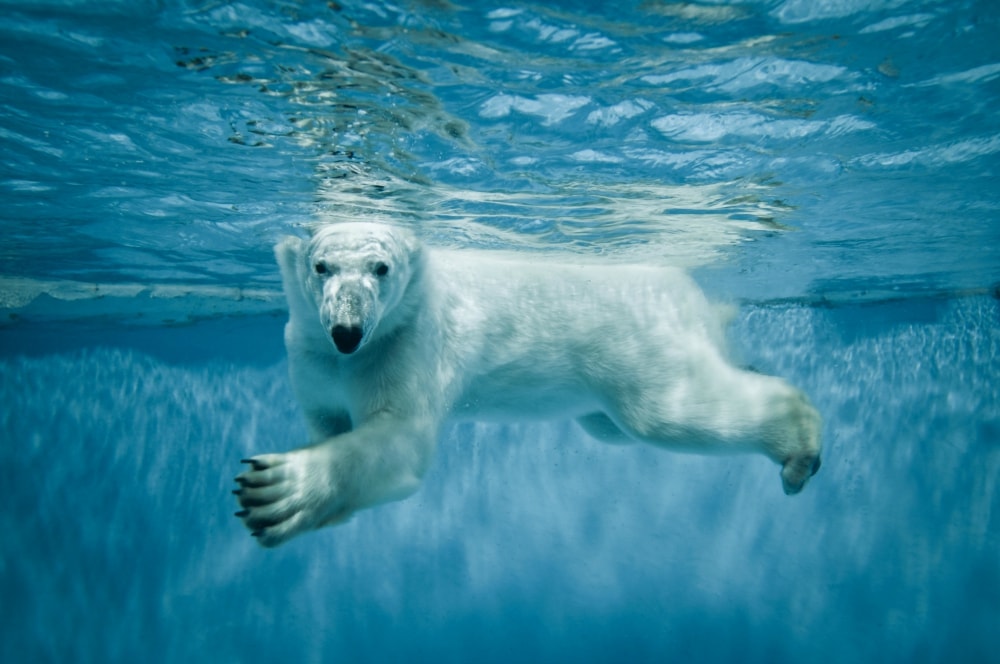 Believe it or not, google gets asked this question quite a lot so we’re here to help set the record straight once and for all – yes, polar bears can swim! In fact, polar bears are very good swimmers and will swim across bays and long distances with no problem.

How Far Can Polar Bears Swim?

Not only can polar bears swim, they can actually swim very long distances. According to a study published in Zoology, polar bears regularly swim distances of 48 kilometers or 30 miles – that’s a long way! There has even been a recorded case when a polar bear swam 354 kilometers or 220 miles! It’s lucky they’re designed so well for swimming, the ability to swim great distances may help to save them in these times when the sea ice is melting through climate change.

How Fast Can A Polar Bear Swim?

How Do Polar Bears Swim?

Polar bears swim in a “dog-paddle” style. They use their front paws to propel them through the water while their back feet and legs are held flat and are used as rudders to guide their direction.

They swim in icy water but that doesn’t bother the polar bear – they have their thick layer of fat to help protect them from the cold while they are swimming. Polar bears also have a neat little trick to help them to swim – their nostrils close when underwater!

Can I Swim With Polar Bears?

It might seem an impossible dream, afterall, polar bears are wild and dangerous animals, but, for those of you who have always wanted to swim with a polar bear, it turns out that it is actually possible! The Canadian Polar Bear Habitat in northern Ontario offers their guests the chance to do just that!

Obviously you’re not actually able to touch these magnificent animals but you are able to swim in a pool right next to them where the only thing between you and the polar bears is a wall of shatterproof glass. This could be a truly magical experience for big polar bear fans. Learn more about swimming with polar bears here.

How Deep Do Polar Bears Dive?

No one really knows how deep a polar bear can dive but researchers estimate that they can dive down to around 6 metres or 20 feet below the surface. They usually only need to make fairly shallow dives when stalking prey or searching for kelp.

How Long Can Polar Bears Stay Under Water? If you want to know more about polar bears, and maybe even watch them swimming, you can visit them at one of the facilities with polar bear exhibits or maybe even try to see one in the wild in its natural habitat. We’re sure you’ll discover just how good these incredible creatures are at swimming! We hope you’ve enjoyed learning everything you need to know about swimming polar bears!